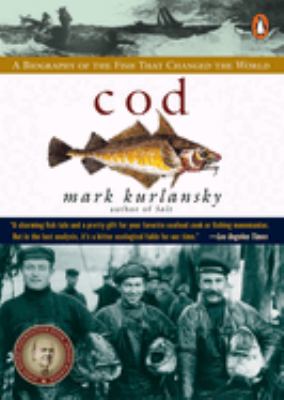 Of all the forms that nonfiction books take, the microhistory is my favorite. A microhistory is a history of a small thing – an event, a social phenomenon, a food, or an object – that connects to a larger worldview. The microhistory is a great way to learn more about the world through the narrow lens of a subject one is interested in.

I was introduced to microhistories by the assigned reading for a world history class, in which we read “Cod: A Biography of the Fish that Changed the World,” by Mark Kurlansky. In “Cod,” Kurlansky delves into the social history of fishing for, and eating, cod. I became enraptured by Kurlansky’s writing and the way he wasw able to craft a world history lesson out of fish. From the Basque people of Spain, to English fish and chips, to New World fisheries in Massachusetts, Kurlansky weaves a narrative of the importance of the titular fish to the peoples of the Atlantic region. He includes the impacts overfishing of cod has had on those cultures and even several different recipes to prepare cod. Other microhistories by Mark Kurlansky available at the library include “Paper: Paging Through History” and, previously mentioned in this column, “Salt: A World History.”

“The Falcon Thief: A True Tale of Adventure, Treachery, and the Hunt for the Perfect Bird” by Joshua Hammer is the true crime version of a microhistory. Hammer tells the tale of an international bird-egg smuggler and the detective of the Wildlife Crime Unit tasked with catching the criminal. To give background on the crimes and the world of rare-bird smuggling, Hammer digs into the history of falcon racing in Dubai, the antiquarian hobby of egg collecting, and of course the biology of the birds themselves. This book is great for true crime fans, bird-of-prey admirers, and anyone interested in an adventure that spans the globe.

Most of us don’t truly appreciate our clothing outside of its style and its comfort. Kassia St. Clair aims to change this in her book “The Golden Thread: How Fabric Changed History.” In thirteen segments, St. Clair maps the human history of fabric from the first clothing made by humans in the Paleolithic Period all the way to the fabric used in astronaut suits. Because fabrics are produced by people, St. Clair illustrates how our desire to produce textiles has influenced our culture. Fabric production has had an important role in nautical navigation, influenced international trade relations, and helped bring about the Industrial Revolution and the transatlantic slave trade. It is fascinating how much more thought I have put into the fabrics that surround me after reading this book.

Mary Roach is one of the most well-known names in the microhistory genre. She has written books on ghosts, sex, the GI tract, soldiers and the book I read, “Stiff: The Curious Lives of Human Cadavers.” The question Roach attempts to answer is: what happens to our bodies after we pass on? Just the physical parts, mind you – she leaves the spiritual side to others more qualified. In this sometimes hilarious and absurd book, Roach covers the history of bodysnatching for medical colleges, cadaver testing, head transplants, and more. Roach discusses the generosity of those who donated their bodies to science and the ethics and uses of the tests performed. If you’ve escaped a car crash without injury, you have a cadaver to thank for testing the limits of the human body. She finishes the book by including an answer to what she will do with her body when she no longer needs it. “Stiff” will prompt you to consider the same question while fascinating you and – at times – making you nauseous. For more of Roach’s humorous and offbeat takes, check out “Spook,” “Bonk,” “Gulp,” “Grunt,” or her newest adult novel, “Fuzz.”

My favorite thing about microhistories is how versatile they are. In addition to the microhistories in this article, there are histories on books, oil, rain, bananas, forks, pigments, ghosts, mushrooms, epidemics, and poisons – just to name a few. If you want to learn more about the things we interact with every day, stop by the library and ask a librarian about a topic you are interested in.