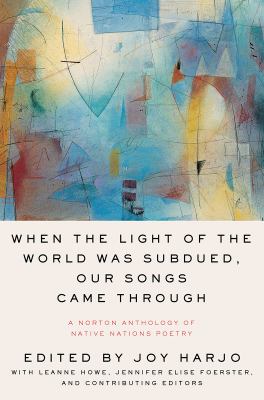 ReadMHK is Manhattan Public Library’s community-wide reading program. November’s theme, books by Native authors, was inspired by American Indian and Alaska Native Heritage Month. What began in the early 1900s as an attempt to get a day of recognition, became a week-long celebration in the mid-1980s, and was expanded to the entire month of November in the 1990s. This is a month to broaden your perspective, celebrate the culture, and acknowledge the contributions of Indigenous and Native peoples. One of the best ways to do this is through reading poetry written by Native authors, and we’ve got plenty to choose from at the library.

One of my more rebellious youthful acts was starting sentences with “and” when I was writing. And I got the courage to do that after reading poetry and learning that writing didn’t need to follow standard conventions. Capital letters could be ignored, sentences could be broken up across multiple lines, and you could use math and patterns to create stories. Poetry allows for the freedom to express yourself as you are without trying to fit into a restrictive box. This makes for a unique and compelling format for Native authors to tell stories about their people, history, and culture.

I’ll be the first to admit that I have a fairly simple view of what poetry is, but thankfully, poets have never come to me for advice on how to write or structure their work, so you’ll find a wide variety of poetry, both in content and structure, to suit your tastes. In “New Poets of Native Nations” edited by Heid E. Erdrich, a Turtle Mountain Ojibwe author, you’ll find the selected works of twenty-one poets who were first published within the last twenty years. One of my favorite poems is by Oglala Lakota poet Layli Long Soldier, not only because it breaks the fourth wall in an interesting way, but also because I learned about a historical event I was unfamiliar with. In “38,” Long Soldier tells the true story of the Dakota 38, which references the mass-hanging of thirty-eight Dakota men following the Dakota War of 1862 in Minnesota. The war lasted 37 days and was in response to the treatment of the Dakota people in the region, land restrictions, and fear of starvation going into winter.

The Dakota War of 1862 occurred at the same time as the Civil War, an event that tends to pull focus in the study of American history during that period, but it’s imperative that we learn about all aspects of our history during that time, not only the fight to end slavery, but also the continued mistreatment of Indigenous people throughout the country. Long Soldier’s poem about this event is tragic, but one that’s important to read.

“When the Light of the World Was Subdued, Our Songs Came Through” is an anthology of Native nations poetry edited by Joy Harjo of the Muscogee Nation, who is the first Native American Poet Laureate of the United States. This book features the poetry of more than 160 poets from almost 100 Indigenous nations. Rex Lee Jim of the Diné (Navajo) tribe has a poem called “Saad” featured in this anthology written entirely in Diné Bizaad, the Navajo language, and then translated into the English poem “Voice.” Even though Jim does his own English translations, he has said it makes him uncomfortable because he knows that what he has written can’t really be explained in English. It is dependent on the sounds that are part of the Navajo language, and those do not translate.

Jim is also a proponent of more work being written in Navajo so the language won’t be lost. And he encourages readers to find someone fluent in Navajo to help them with words they don’t know, rather than relying on the English translation. This will not only help them learn, it’s also a way of making connections and building a community, which is one of our goals for ReadMHK.

Along with informal book discussions at the library on the third Tuesday of each month at 7:00 PM, we are also producing the ReadMHK Podcast. Each month we get to know our guest, talk about books related to our theme, and offer reading suggestions. Our guest for November is Dr. Debra Bolton, who directs Intercultural Learning and Development and is faculty in geography at Kansas State University. It’s a great episode, and you can find it on the library’s website or wherever you like to listen to podcasts.