by Rhonna Hargett, Associate Director of Learning and Information Services 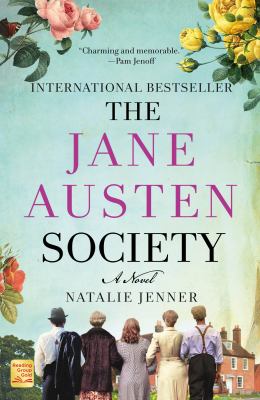 Several years back (beginning with the Colin Firth Pride and Prejudice era), I was obsessed with all things Jane Austen. I read all the books, all the biographies and spinoffs, and watched all the movies. I think I burnt myself out a bit. When I picked up “The Jane Austen Society” by Natalie Jenner, I was a bit tentative. It only took a couple of chapters, though, before I was completely sucked in. This delightful novel reminds me of the joy I felt when I read the commentaries or discussed the books with a true Austen scholar, as well as the gift that Austen has for helping us to sort out a confusing and overwhelming world.

“The Jane Austen Society” takes place in Chawton Village, England, where Jane Austen spent the last few years of her life and wrote most of her novels. The novel begins towards the end of World War II, and the village is reeling from the losses of both world wars. A recent war widow, a farmer who lost two brothers in WWI, a widower doctor, and a young precocious housemaid discover a shared love for Austen’s novels and band together in an attempt to preserve the few remnants of the author’s presence in their little community. They persuade Fanny Knight, a distant relative of Austen’s, to join them, along with a Hollywood star and an expert in estate sales from Sotheby’s auction house. All of them have been touched by Austen’s stories of resilience and hope, and they want to create a place where others can come to honor the gifts she gave to the world.

It is difficult at times to keep in mind that this book is fiction. None of the characters actually existed, and the timing isn’t completely accurate for the development of the society and the establishment of the museum that exists today. However, Jenner has captured the devastation of a society recovering from war and the ambivalent relationship that the British people had with Jane Austen’s legacy.

Although the book isn’t quite historically accurate, it’s interesting that Jenner put the development of the society at the end of World War II. (The society was actually established in 1940.) This connects to the fact that Jane Austen’s writings have long been considered a balm for trauma. Author Claire Harman shares in her book “Jane’s Fame: How Jane Austen Conquered the World” that Austen’s novels were recommended as therapeutic material to be read to World War I shell-shocked soldiers. Rudyard Kipling wrote “There’s no one to touch Jane when you’re in a tight spot.” Some see escapism as her primary appeal, and there truly is something very calming about the setting and the guaranteed happy ending, but the romance in Jane’s books has an underlying difficulty that we sometimes forget. There were not many options for women who did not marry. The Bennet girls would have lost their home and income if their father had died. The Dashwood girls actually lost their home and support when their father died, and were fortunate to receive assistance from a relative they barely knew. Fanny Price relied on the kindness of her wealthy aunt and uncle. Anne Elliot is subject to the whims of her family, shipped here and there to help wherever needed, with no power or resources to run her own life. Austen’s books have an underlying theme of the precariousness of life, giving her characters a chance to learn more about themselves and to demonstrate resilience in the face of difficulty.

“The Jane Austen Society” appeals on many levels: as a story of hope rising out of despair, an escape to a charming village in a different time, and the chance to vicariously join a group of Janeites.  Manhattan Public Library has the book in print, on CD, and digitally as an audiobook or ebook. Since this novel will also likely inspire you to reread your Austen favorites, they are also available in several formats. I know that I can’t wait to go back to reread them and see what new treasures I find that went unnoticed before.