An Apple a Day, as They Say 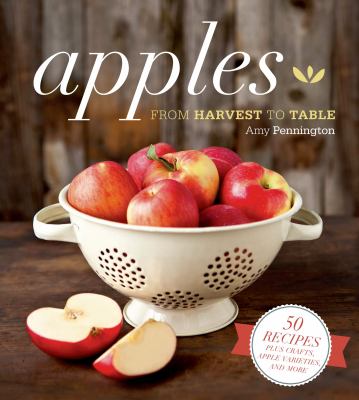 An apple a day keeps the doctor away. Oh, if it were only true. There are over 7,500 varieties of apples, but a 2015 study found no evidence that, while apples are good for you and tasty, eating one a day won’t necessarily keep the doctor away. Today is Eat a Red Apple Day. It is the perfect time to sample a few of the books on growing and cooking apples available at your library.

“The Apple Lover’s Cookbook,” by Amy Traverso, is the most complete cookbook for enjoying and cooking with apples. This full-color guide to fifty-nine apple varieties comes with flavor descriptions, history, and, how to use apples in the kitchen. The author gives us a front row seat to meet farmers, cider makers, and other apple enthusiasts. There are one hundred recipes in this book running the gamut from simple cobblers to exotic fare such as Cider-Braised Brisket or Apple-Gingersnap Ice Cream.

“Apples, From Harvest to Table,” by Amy Pennington, features 50 delicious recipes organized into five chapters, from Breakfast & Brunch to Jams, Jellies & Preserves. This book is illustrated with beautiful food photography and vintage botanical drawings. It also includes essays on topics including how to make your own apple juice, heirloom apple varieties, and recipes and apple crafts for kids.

“The Apple Cookbook: 125 Freshly Picked Recipes,” by Olwen Woodier, is a revision of the author’s 1984 classic. It has been updated to include guides to newer varieties and cultivars, along with 30 new recipes, and full-color photography. This book offers descriptive information on the history of apples, as well as apple selection, storage, and cooking methods. While recipes for apple pies are featured, the author also provides unique savory preparations such as Apple Meatloaf and Ground Lamb Kebabs with Apple Mint Raita.

“Apples to Cider: How to Make Cider at Home,” by April White and Stephen Wood, is a beginner’s guide to making hard cider. This book begins with information about the roots of hard cider in America, giving the history and styles of cider. It then focuses on equipment, the types of apples to use, and how to set up the space for fermentation. Along with the step-by-step directions for cider making, the authors suggest techniques for evaluating each batch to further improve the end product.

We’ve all heard the tale of a man wandering in the American wilderness, wearing a pot on his head, and throwing apple seed. John Chapman, aka Johnny Appleseed, was more than a myth. Born in 1774 in Massachusetts, by the 1790s, Chapman was making his way west into Pennsylvania and Ohio, planting apple trees and spreading Swedenborgian philosophy.

In “Johnny Appleseed: the Man, the Myth, the American Story,” author Howard Means attempts to separate history from the folklore surrounding John Chapman. The rag-clad, barefoot nomad with a tin pot for a hat, was welcomed into frontier cabins despite his appearance.  Chapman was known for his boundless love of nature, his kindness, generosity, and bravery.  The seeds Chapman planted generally grew to trees bearing scrawny, sour apples, better suited for cider than anything else. While much of Chapman’s life is legend, Means pulls together his research on a fascinating figure and the myths that surround him.

Additional titles about Johnny Appleseed for younger readers include “Seed by Seed: the Legend and Legacy of John “Appleseed” Chapman,” by Esme Codell, and “Johnny Appleseed: a Tall Tale,” by Steven Kellogg.  Codell portrays a man who sometimes traded his trees for clothing. Chapman also gave away seedlings, lent his books to settlers, planted medicinal herbs, and, showed great kindness to animals.

Kellogg chronicles Johnny Appleseed’s travels, his legendary scattering of apple seeds, and his telling of Bible and adventure stories to the children and adults he meets along the way. Both picture books are brilliantly illustrated.

Food for Fines is coming again to the library. On Saturday, December 7, from 10:00 to 5:00, you can donate nonperishable food items for the Flint Hills Bread Basket in exchange for vouchers to pay your overdue fines. Vouchers are limited to $10 per account, and must be used during December. That’s a sweet way to get rid of your overdue fines, and help your neighbors.