Home » Blog » We All Scream for Ice Cream

We All Scream for Ice Cream 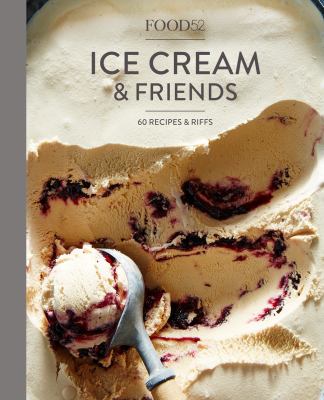 You scream, I scream, we all scream for ice cream. July is over. Did you remember to eat copious quantities of ice cream during July, National Ice Cream Month? The average American consumes more than 26 pounds of ice cream per year. But the biggest lovers of ice cream are the folks of New Zealand who cool themselves down with over 35 pounds per person per year.

There are dozens of ways to eat ice cream, and countless flavors. Here is a selection of some of the books at the library that can help you create all sorts of frozen treats.

“Food52 Ice Cream and Friends,” by Amanda Hesser, offers a survey of frozen desserts from the editors of Food52.com.  Impressive in its variety, the book includes all-new and reader-contributed recipes, such as the Saltine Cracker-Brownie Ice Cream Sandwich, and Lemongrass Chile Ginger Ice Cream. But don’t worry, there’s plenty of good old chocolate and vanilla as well. There are also helpful tips and tricks for enlivening melted ice cream, getting creamier scoops, and making store-bought ice cream a little more exciting.

Who invented ice cream? Mixing ice or snow with fruit, honey, spices, and other flavors has been around since about 500 BCE. Modern ice cream made with milk and cream was first made by hand in a large bowl placed inside a tub filled with ice and salt. In 1843, Nancy Johnson received a U.S. patent for a hand-cranked churn that replaced the pot-freezer technique.

“Jeni’s Splendid Ice Cream Desserts,” by Jeni Bauer, shows you how to make frozen custard, soft-serve, and dairy-free ice cream. Of course you can use store-bought ice cream in all the desserts listed in her book, but where’s the fun in that? Instead try making Cumin & Honey Butterscotch, Extra-Strength Root Beer, or any of 30 new flavors.

Sample a nation’s worth of ice cream in “Scoop Adventures: the Best Ice Cream of the 50 States,” by Lindsay Clendaniel. The author offers the best from the best from across America. She also provides over 80 tested recipes for you to try in your own ice cream maker. Try Rhode Island’s Seaport Salty Swirl made with peanuts, pretzels, and caramel, or Alaska’s Refuge Wild Berry Snap made with blueberries, cranberries, and gingersnaps. The Kansas selection is Thai Peanut Curry ice cream from Glacé Artisan Ice Cream in Leawood (unfortunately the location has moved to KCMO since the book’s publication).

Sandwiches and good. Ice cream is better. Why not combine to two? Natasha Case, co-founder of Coolhaus, does just that in her debut cookbook, “Coolhaus Ice Cream Book.” The book provides a humorous introduction to the history Coolhaus and offers readers the opportunity to recreate some of their signature ice cream sandwiches. Try the Bananas Norman Foster, the Oreo Heckman, or the David Rocky Roadwell made from S’mores Cookies and Nutella Toasted Almond Ice Cream. Recipes range from traditional to experimental and include vegan and gluten-free choices.

In 1978, 2 childhood friends, Ben Cohen and Jerry Greenfield, opened an ice cream parlor in a converted gas station in Burlington, Vermont. The rest is history. In “Ben & Jerry’s Homemade Ice Cream and Dessert Book,” the ice cream making legends share both their story, and dozens of recipes for delicious ice creams and desserts. The book was published in 1987, so their 11 greatest hits, while including New York Super Fudge Chunk and Cherry Garcia, does not include Chunky Monkey.

This is just a sample of the dozens of books available to help take the heat out of summer with delicious frozen treats.