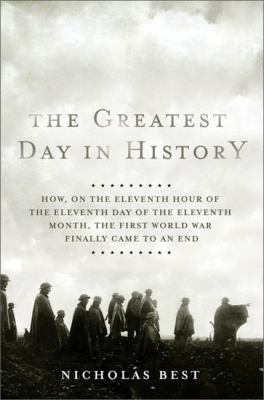 On the eleventh hour of the eleventh day of the eleventh month of 1918, the guns of August finally fell silent across the Western Front. The Great War, the War to End All Wars, what later came to be known as the First World War, came to an end.

The term “First World War” was used by Charles à Court Repington in 1920 as a title for his memoirs. The term “World War I” was coined by Time magazine in its June 12, 1939 issue. In the same article, the term “World War II” was first used to describe the new approaching war.

World War One was a costly four years in terms of the human toll. Combat deaths from all belligerents totaled over 8 million, with total military deaths (including those missing in action) were estimated at between 8.5 and nearly 11 million. Total casualties, including civilians, were estimated at between 15 and 19 million. The greatest loss of life as a percentage of total population was the Ottoman Empire with over 3 million dead, amounting to over 15% of the population. In comparison American casualties totaled 117,465, or 0.13%.

There have been countless books about the war. The library has a collection of titles on individual battles and other aspects of World War One, including a few titles about the end of the war and its aftermath.

In his book “A World on Edge: The End of the Great War and the Dawn of a New Age,”   Daniel Schönpflug describes the aftermath of the Great War that has left Europe in ruins. He writes that with the end of fighting comes the possibility of a radical new start. That with new politics, new societies, new countries, new art and culture, the window of opportunity suddenly opened for Europe and the world. Unfortunately, that window closed again too soon.

Nicholas Best presents the final days of the Great War in “The Greatest Day in History: How, on the Eleventh Hour of the Eleventh Day of the Eleventh Month, the First World War Finally Came to an End.” He gives firsthand accounts of the war’s end from the viewpoints of the famous such as Charles de Gaulle, Harry S. Truman, George Patton, and Marie Curie, as well as the lowly private soldier, and a certain Corporal named Adolf Hitler. Some of the survivors of the Great War were caught up in the next great conflagration that burned the world a mere two decades later.

The consensus among historians is that the Versailles Peace Conference was a failure. Not only a failure, but it set the stage for World War II. In “Paris 1919: Six Months That Changed the World,” Margaret MacMillan provides perceptive portrayals of the key players at the conference. Individuals such as David Lloyd George, Georges Clemenceau, and especially Woodrow Wilson. MacMillan characterizes Wilson as often rigid, arrogant, and vague about concepts like self-determination that confused even his own advisors. This book is a must for anyone seeking a deeper understanding of one of history’s most tragic failures.

While November 1918 saw the end of the global war, it was in the middle of another worldwide tragedy. The outbreak of Spanish Influenza beginning in the spring of 1918 claimed the lives of between 50 and 100 million people. In “Pandemic 1918: Eyewitness Accounts from the Greatest Medical Holocaust in Modern History,” Catharine Arnold focuses on the challenges that World War One posed on containing the flu. Mass troop gatherings and movements helped spread the disease. Authors including Katherine Anne Porter and Thomas Wolfe wrote of the flu’s destruction in fiction, and survivors recalled that there were no medicines to cure the disease, and very little any doctor could do. Arnold’s is a well-researched history serving as a stark warning of the threat of pandemic disease.

The spark from an assassin’s bullet in Sarajevo that set off a fire the likes of which the world had never known, was finally quenched on November 11, one hundred years ago. For more information on the Great War, visit the National World War One Museum and Memorial in Kansas City https://www.theworldwar.org/.