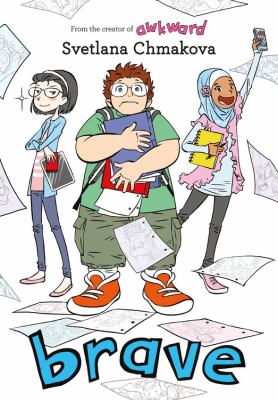 With school in full swing, everyone’s “to-read” lists are getting filled with assigned texts so sometimes you need something short and fun for leisure reading. Graphic novels fit that bill perfectly and cover a variety of genres.

In Brave by Svetlana Chmakova, Jenson is just trying to get through middle school without drawing too much attention to himself. He doesn’t enjoy the kind that he usually gets from his classmates. Jenson wouldn’t mind getting the attention of the newspaper team, though. He really wants them to publish his article on sunspots–he just hasn’t written it yet. Speaking of sunspots, he really wants to work for NASA someday, but failing math doesn’t seem like a promising start to a career in the sciences. Meanwhile, the newspaper team is trying to interview him for an exposé on bullying. But Jenson isn’t being bullied…Sure, everyone is mean to him, but…they’re just joking, right? Chmakova writes strong characters with quirky personalities, and draws facial expressions that bring the conversations to life. If you like realistic fiction and school stories, you’ll enjoy this.

Set in an alternate Victorian Paris, The Prince and the Dressmaker by Jen Wang, is about a young prince with a secret passion for beautiful gowns. He manages to hire a talented seamstress, Frances, to create custom designs just for him. At night they go out on the town together, and it isn’t long before Lady Crystallia (Prince Sebastien’s other name) is the fashion icon of Paris. Frances and Sebastien are the best of friends, but as Lady Crystallia becomes increasingly famous, they reach a crisis point. In the end though, the decisions they’re forced to make will help them lead their best lives. If you like fairy tales and gender fluidity, you’ll love this.

Delilah Dirk and the Turkish Lieutenant by Tony Cliff opens with Selim. Selim is a brilliant man who speaks multiple languages and loves to make—and drink—delicious tea. Unfortunately for him, those kind of skills aren’t worth much in his line of work–the Turkish army. So when a prisoner escapes and a misunderstanding leads to Selim taking the blame, he’s more than willing to escape with the prisoner, the danger-loving Delilah Dirk. Delilah is an Englishwoman who roams the world stealing things, rescuing people and generally getting into a lot of sword fights. Roped into her life of swashbuckling, Selim eventually finds that the excitement of travel and danger has ruined his taste for quiet and calm –but not tea. The art effectively conveys a sense of action and will make you want to travel, but the real highlight of the book is the snarky tone of the conversations. If you like adventure, be sure to read this.

Through the Woods by Emily Carroll is a collection of horror stories. Girls stranded in a farmhouse during a snowstorm keep disappearing, one a day. A bride arrives at her new husband’s mansion to find the ghost of his first wife. A man murders his brother in the woods, but three days later, that brother reappears. Two best friends pretend to be clairvoyant until a real spirit gets involved. A girl visits her brother and his wife for summer vacation only to discover that her new sister-in-law is not human. The art adds a gruesome quality without being graphic, and the vague endings heighten the sense of suspense. If you’re into horror or suspense films, you’ll enjoy this.

Bingo Love by Tee Franklin begins when teenagers Hazel and Mari meet at a bingo game in the 1960’s and fall in love. When their parents realize that the girls are romantically involved with each other, they are quickly separated and Hazel is married off. Years later after raising families and having grandchildren, they meet again. The spark is still there. Once again, their families oppose their love but for different reasons this time around. This a sweet love story featuring queer women of color. If you like historical fiction and rainbow pride, you won’t want to miss this.