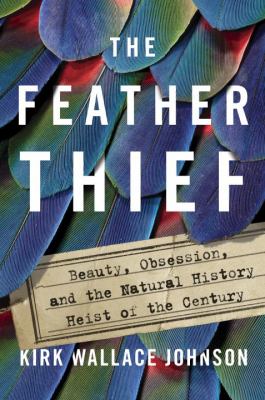 One Man’s Obsession with Museum Rarities

I know nothing about fly fishing.  I knew little about the fashionable craze to obtain exotic feathers during the 19th century.  I had never heard of the British Museum at Tring, nor had I known of Edwin Rist’s past.  Yet all of those factors are a part of a wonderful new nonfiction title.

While fly fishing outside of Taos, New Mexico with his guide, avid fisherman and author Kirk Wallace Johnson learned about Victorian salmon fly-tying.  His guide proudly showed some of his expertly tied specimens that he considered more artistic than useful.  This led to a discussion about a little known theft that Johnson vowed to investigate, and that obsession became a book that took Johnson several years to complete.  But what a book it is.  The Feather Thief is an amazing piece of writing that explores obsession, greed, and even the craft of fly-tying itself.

Of all the thefts from world-renowned museums, the plundering of the ornithological collection at the British Museum of Natural History at Tring, England is one of the oddest.  In 2009, American Edwin Rist managed to thwart security measures, thus allowing him to steal hundreds of rare bird feathers and skins. He not only made away with a priceless treasure, he also evaded capture for a long time.

Many of the stolen items were collected during the 19th century by a naturalist named Alfred Russel Wallace.  Wallace was intrigued by insects and birds and made several dangerous voyages to the Amazon and Bermuda, among other destinations.  He collected specimens by the thousands and sold many of them to the British Museum.  He was particularly interested in the golden-plumed Bird of Paradise and finally captured one on the Aru Islands.  Wallace, a contemporary of Charles Darwin, came to believe in the importance of evolution through natural selection and urged other scientists to preserve his found treasures for future study.

The discovery of those 19th century specimens by Wallace and other naturalists led to a craze in collecting bird feathers.  Women’s hats sported feathers and skins, and Victorian fly-fishermen collected feathers for fly-tying.  As a result, bird populations throughout the world were decimated in the late 19th century, and many rare species virtually disappeared.

And that’s where Edwin Rist enters the story.  As a teenager, he developed an interest in Victorian fly-tying and he took lessons from some of the best teachers in America.  He became quite proficient in tying and earned honors at contests for his artful creations.  The major obstacle that he and other devotees of the skill faced was that so many of the exotic feathers the Victorians used were either no longer available or very expensive.

Rist was also a talented musician and was invited to study and play with the London Royal Academy.  While in London, he learned about the collections at Tring and became obsessed with them.  A visit to the museum, during which he casually opened drawers containing valuable specimens, made him realize that security measures would be easy to circumvent.  He convinced himself that he should steal the skins for their future artistic potential.

Exactly how many feathers and skins did Rist manage to steal?  Did he sell them or keep them for himself?  Were the specimens recovered?  Was Rist charged with the crime?  How did the museum staff react?  How did the network of Victorian fly-tiers respond?  Did the author of the book interview Rist?   For answers to these and other questions, you must read this exceptional book.  I promise you will be amazed by the Victorian craft, by the historical experiences and collections of Alfred Russel Wallace, and by Johnson’s dogged investigation into the crime.  This book is true-crime reading at its very best.