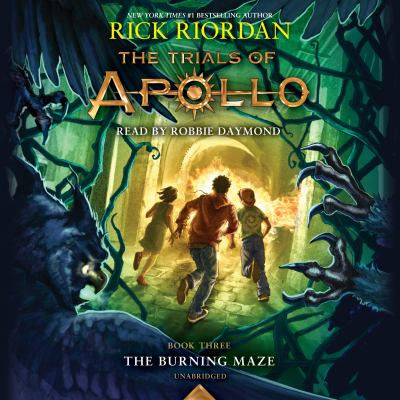 Fantasy Audiobooks for the Road

Summer is here! And with it comes the lure of long car rides. My husband and I find audiobooks pass the long miles of summer travel to western Kansas. In May, I found myself devouring Trials of Apollo: The Burning Maze by Rick Riordan. This book is the third in a series about the god Apollo who has been sent to earth as sixteen-year-old Lester Papadopoulos. He becomes a servant and friend to young Meg McCaffrey. Apollo/ Lester and Meg need to work together because they have to save the world from evil, ancient Roman emperors. I turn into a fangirl waiting for these humorous young adult novels, and I love listening to audiobook versions.

Sadly, it is now June, and I am trying to find another audiobook.  I also have to keep in mind something my husband might enjoy as we plan car trips this summer. For me, a great audiobook comes down to one of two things: the story or the narrator. Here are some ideas while Game of Thrones is checked out.

One author my husband enjoys and who meets my great audiobook definition is Brandon Sanderson. Sanderson is an excellent fantasy author who has a number of great books and audiobooks. He is similar to George R.R. Martin (but less homicidal) with beloved characters. The Stormlight Archives series engrosses listeners with its alternating narrators and rich detail of the world Sanderson creates. His characters are also vast and rich. I will warn you: the books are long, and Sanderson has only released book three, Oathbringer, in a ten-novel series. Additionally, Sanderson uses the same universe for all of his novels, which links them all together, and some characters cross over into other series, too. The Sanderson world stays the same, while the time period changes.

If you find yourself wanting to immerse yourself into Sanderson’s world slowly, then I suggest The Rithmatist. So far, this series has one book with an anticipated sequel due out any time. This series is more of a young adult series, and as a result, I found myself in a familiar world filled with magic and a familiar voice. The narrator of this series is the same one who reads for Sanderson’s Stormlight Archives. The Rithmatist tells the story of Joel, who studies Rithmatics, but who is not a Rithmatist. Joel and his friend Melody, a Rithmatist, must solve the mystery of kidnapped Rithmatist students from Armedius Academy while learning how to use Rithmatics—magic that uses chalk—to fight Chalkings, who are two-dimensional drawings. The duo must also work together to compete in the end-of-summer melee tournament.

If all else fails, then I usually listen to my go-to author, Neil Gaiman. I will listen to anything and everything that Gaiman reads himself. Neverwhere or The Ocean at the End of the Lane are two favorite audiobooks that Gaiman narrates. Neverwhere tells the story of Richard Mayhew who helps a young woman named Door. Suddenly Richard now finds himself in a parallel London—London Below. In London Below, Richard must face shadows, monsters, sinister characters, and an angel on his quest to help Door. Mixed with terror and humor, Neverwhere takes listeners on a fantastic journey to a London that could exist beneath the one most people know. BBC also created a full cast audiobook version, which I highly recommend.

Gaiman always has some chilling elements in his works. The Ocean at the End of the Lane includes this creepy element typical of Gaiman’s work, but he also includes magical realism. The novel is told in flashback form as the narrator returns home for a funeral, then finds himself at the house at the end of the lane. Visiting with Mrs. Hempstock, the narrator remembers her daughter, Lettie, who befriended him as a child. He recalls their adventure to defeat a creature and save the world as we know it. At the end of the novel, readers are left wondering if the narrator just remembered a childish fantasy he created with Lettie, or if it all really happened.

I understand fantasy–whether it be dark fantasy, high fantasy or regular fantasy–might not be your cup of tea. However, I can say nothing passes the miles like an enthralling audiobook. Manhattan Public Library has numerous audiobooks for you to check out. Should you find yourself halfway through your trip with no audiobook, then you can use our digital platforms like Sunflower eLibrary and Hoopla to ease your travel.